Though I have many years of experience in Java and Ruby, I just got my first experience in building a C# project the other day, a small Tic Tac Toe game. It is a command-line program coded with the new Visual Studio Community for Mac.

The code has been posted over here: https://github.com/AndyObtiva/TicTacToeSharp 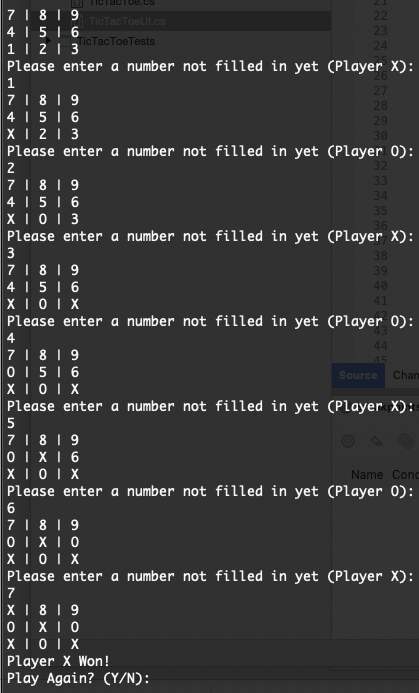 TicTacToe is the game Model based on IGame interface, which houses all the logic for making moves, checking for win or draw, and maintaining the board status after every move.

TicTacToeUI is the Presenter of the game model, sending game output to the View and acting as a controller to process input from the user.

MyConsole based on IConsole interface and leveraging C#'s Console is the View, which renders output to the screen and receives input from the user


Overall, I felt well supported by C#'s versatility and not lacking any programming features from Java and Ruby.

That has not been my experience with other languages that compare to Java or Ruby. For example, Rust, which I've looked into recently, has a very steep learning curve (albeit quite fun) to writing code that auto-manages its own memory without a garbage collector (Rust's highest selling point and greatest innovation). Also, Perl in its later incarnation seemed to be a clone of Perl-inspired Ruby, providing most of Ruby's features, but with alternative syntax, making me wonder why switch at all. Yet again, that means I get to have the option of consulting for Perl projects if need be (though no sane Rubyist would :P ). The same goes for C# after doing more learning in it.

I probably did not exploit every C# feature in the course of writing this mini-project.

Comments are welcome, especially that I could be way off in this article due to being new to C#, and would like to be corrected if so.

Cheers and happy coding!
Posted by Andy Maleh at 7:29 PM

Email ThisBlogThis!Share to TwitterShare to FacebookShare to Pinterest
Labels: C#