Day 2 was kicked off with a keynote speech by Scott Adams! You know... the writer/illustrator of Dilbert? 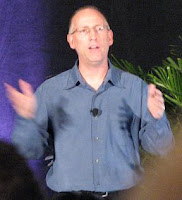 His speech was pretty entertaining and somewhat enlightening as he told us the story of how he worked in many office jobs before he settled on doing the comics. He showed us Dilbert comics beginning from when he started till now, including the Dilbert original concept: 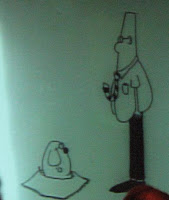 On to EclipseCon stuff, I attended an interesting talk about Java 7 potential features. Highlights were:
David Orme and I attended a panel called "Eclipse RCP: Experiences along the way", which had our Obtiva secret agent, Patrick, on it: 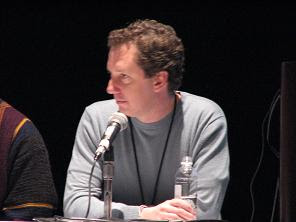 It was an interesting discussion of how RCP is playing out in the industry, such as the Siemens and Nasa. I reported my issue with the RCP Application Update process being too slow for dial-up users, even with proper structuring of plug-ins. I also reported how we solved the problem at work by re-implementing Update Manager to do class-level diffing, thus pushing to clients only the classes they need of a package and significantly reducing download size in the process. If anyone is interested to learn more about that, feel free to contact me. While I participated in the development of the re-implemented Update Manager, David Orme and David Beers have actually been the minds behind it.

Lunch was pretty fun. They had tables with post signs on them, each mentioning a particular IT topic such as ORM, Scripting, SWT, etc... I sat on a table that said BPEL and had interesting chit-chats with a number of people.

One of the big highlights of the day was seeing a demo of Lotus Notes 8, which is now built with RCP technology. It looked simply fantastic: 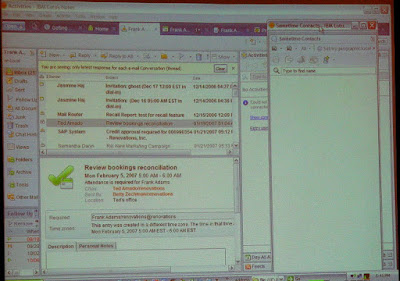 After attending a few more talks, like a quick demo of the power of Model-Driven Development by Angel Roman and Bruce Trask and an eRCP talk by Gorkem Ercan and Mark Rogalski, I headed back to the hotel for some rest.

At night, I attended an IBM reception, in which I concluded my night with a sumo fight. Here is a photo: 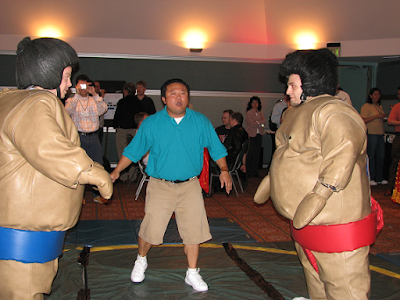