Day 3 is my presentation day. I enjoyed a breakfast with Kevin Taylor in the morning, and then spent some time rehearsing my short talk on RCP Patterns and Anti-Patterns.

At 11:10, I exploded into the audience like a hurricane, acting the patterns and anti-patterns out loud, and sharing many of the lessons I learned over the course of developing an 18-month RCP project in an eXtreme Programming team.

After the presentation high, I rested by attending a few other short talks and then lunch. What lunch table topic did I select today? Mmm, Callisto. The table had Eclipse committers from the IBM OTI division. I talked to Steve Northover, author of SWT, Tod Creasey, JFace contributor, and a few other employees of the OTI division who work on different pieces of RCP, such as platform UI and PDE. It was nice getting to know them and talk about what they do in their jobs.

After lunch, I attended a panel titled "What sucks about Eclipse". I mentioned how the UI can be overwhelming and intimidating to first-time users in comparison to the NetBeans UI, and suggested adding an EZ or New-User perspective that simplifies the interface by hiding many of the advanced functions away. After all, in one of my Software Engineering master courses at DePaul University, the topic of Eclipse UI complexity came up in class.

Another interesting panel that I attended was "UI Testing in the Real World: Myths and Realities". Attendees discussed the practicality of UI testing, especially for teams that are doing agile iterative development and are already disciplined about writing unit-tests. Dan Rubel, one of the co-authors of Building Commercial-Quality RCP Plug-ins was passing the microphone around to people, and of course, being the conversationalist I always am, I took my turn to talk about my team's experiences with UI testing. One of the people on the panel was Elizabeth, an employee at IBM who works on TPTP. She was kind enough to inform me after the panel about a TPTP Testing Strategy document that provides best practices on UI testing.

My night concluded with a SWT Birds of a Feather meeting with Steve Northover, an Eclipse Jazz demo by Erich Gamma and others on the Jazz team, and an IBM party to celebrate the top Eclipse committer.

Here are a few photos: 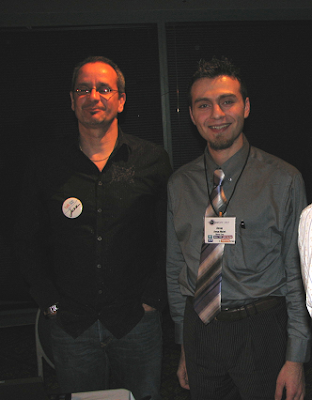 Photo with Erich Gamma, one of the Gang of Four who wrote the Design Patterns book. 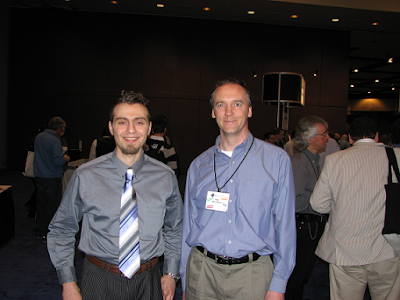 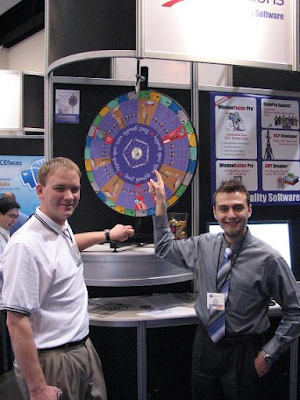 Photo of me winning GWTDesigner by Instantiations. 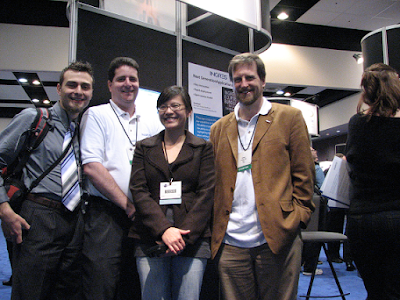 The Cool Ingres Folks interested in a Rails Ingres plug-in for ActiveRecord.
Posted by Andy Maleh at 11:36 PM

I've been trying to find more information about Jazz; I was wondering if you could blog about your impressions of their demo? I heard it was quite impressive.