One of the things that I encounter often with folks disenchanted with Agile processes/technologies is that they tried them without guidance or proper training (e.g. XP or Ruby on Rails), failed due to reasons mostly related to lack of skill, and then too quickly blamed the failure on the technology and/or Agile process. However, too often what I see when I check their codebase or environment is not Agile, yet Adhoc software development disguised as Agile and sprinkled with a few Agile practices here and there superficially applied.

To be more specific, here are the things I see in their environment:

Now, let's address each of these items in their own blog post, including what the misconceptions Non-Agile folks have about them.

In the Waterfall process, it is recommended for developers to spend time designing the code up-front before diving into implementation. That prompts developers to often think of all the pieces, study coupling and cohesion, and come up with a design flexible enough to handle future requirements. Now, it's important to have software design as a skill for any developer Agile or not in order to ensure the code is maintainable. But, here is where misconceptions come into play with many inexperienced developers. Waterfall developers think that if you design for any possible future requirements, the codebase will be so easy to maintain when the future requirements come that they will be extremely productive. Thinking of it black (extremely engineered) and white (no engineering) like that results in code so over engineered that developing to meet today's business requirements comes to a crawl in terms of productivity since the code design tries to address requirements way far into the future, maybe even 6 months or a year ahead. This in my experience results in code so difficult to maintain that it discourages developers from following good design practices in the long term as they take shortcuts here and there due to business pressure whenever adding new features, resulting in a terrible code base.

People new to Agile that are not skilled with it get a different misconception as a result. They think that Agile is a license to under-architect software for the sake of simplicity, forgetting about Agile incremental evolutionary software design. That works well for the first few weeks of a project, but then very quickly deteriorates to extremely under-engineered software for business requirements, and extremely terrible software performance, either making the developers eventually get disenchanted with Agile, or making developers outside of the Agile community snicker (whenever you snicker know you're risking loss of insight about something) thinking "we are disciplined spending time on architecting for performance and future requirements from the start unlike these folks". Unfortunately, that statement also shows lack of experience with successful sustainable business software delivery as the reality of a system over-architected from the start is like I said before, extreme lack of productivity at the beginning of a project that loses business trust, and then neglect of developers to keep the code design of high quality in the future due to how over-complex it is, resulting in a code base that keeps getting worse in over-complexity till the project needs a rewrite. Though some developers accept that as a fact of software development, in my opinion and experience, that's not true beyond that they choose to write code that makes their life hell and then convince themselves that they are just accepting the "reality" that they themselves created. 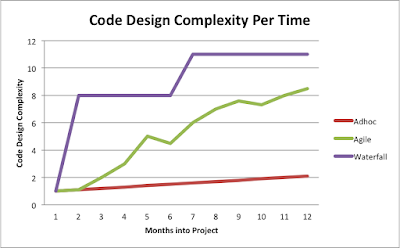 Code design complexity goes higher as more structure is added to the code. Think of 0 as an entire code blob lumped together in one file and 12 as code organized into many files along the lines of object oriented domain driven design and design patterns.

There are multiple things to note about the diagram:

Now, all of this might be common sense to a lot of developers. But, it takes a lot of practice to get disciplined at refactoring your code design regularly and boldly (with the protection of automated tests) to ensure it is neither over-engineered nor under-engineered per today's business requirements.

Still, there are quite a few other misconceptions that I would like to address, such as:

My next blog post will focus on "Difficult-to-maintain test suite.". Stay tuned for part 2.