Glimmer DSL for SWT v4.18.1.0 just got released with the following changes:

Canvas graphics have been on my radar for quite a while, but I have been busy focusing on integrating Glimmer DSL for SWT with Glimmer DSL for Opal with webready app scaffolding and the webify glimmer task as that enables users to instantly turn a Glimmer desktop app into a web app.

In the meantime, I got contacted on Gitter (Glimmer's Open-Source Help Chat) for help with Canvas graphics, which Glimmer did not officially support with its DSL since it focused more on building standard business applications with plain old widgets like button, text field, and table. This all changes with version 4.18.1.0.

I'll let the two new samples speak for themselves. 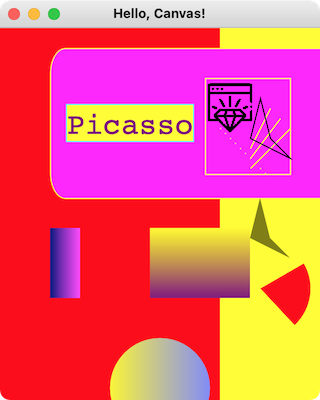 Please keep in mind that these are first cuts of the Shape and Animation DSLs, so they will likely undergo some more battle-testing and further improvements before the APIs stabalize.

In the meantime, Happy Glimmering!